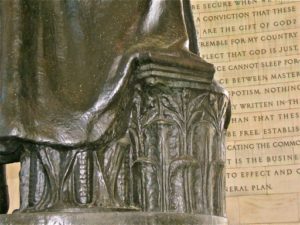 There are 4 quotes within the Jefferson Memorial. The quotes deal with education, independence, laws and government, and religious freedom.

Click on the link to see the quotes on a separate tab or to print LINK#1(opens in a new tab).

You must figure out which letters of the alphabet are referenced in the table below. This means figuring out which speeches are located in the northeast, northwest, southeast and southwest sections of the memorial.

Use the button below to view the interior of the memorial. Your helpful hint is that Thomas Jefferson as he faces forward is looking toward the North.

Once you figure out which speech is located where, find the letters based on the color scheme and number. For example, NW Yellow 7 means find the Northwest speech and find the 7th letter in yellow.

Once you find all 10 letters, unscramble them to complete the name of an important part of Jefferson’s life and enter the answer in lowercase.

If Hint 1 didn’t help you, then to help you along a little bit, then Northeast speech is the speech on education.