Dori Robinson is Academic Expeditions’ resident theater specialist and has developed and led top-notch theater & the arts travel programs for us around the world. Did you know that Dori is also an active playwright, director, and producer? Her most recent play, The Elm Tree, just debuted in Boston with Alight Theater Guild last month and received outstanding feedback. We spoke with her to learn more about her production and creative process.

Q: The title of your play is The Elm Tree — would you give us a brief synopsis of the storyline, and how the title relates (what does it mean)?

DR: The Elm Tree is based on the Greek myth of Orpheus and Eurydice – however, instead of lovers, the two are twins. When Thrace’s twin Mabry dies suddenly, he plunges himself into the Underworld in an effort to reunite his family, thus beginning a journey to Hades. While Thrace meets fantastical characters, Mabry is heading for the Elm Tree, said to have mystical powers which alter dreams and reality. Thrace must reach Mabry before their entire childhood together is erased completely. Together with the audience, Mabry and Thrace explore memories, family, and the very nature of love. Through an immersive style, masks, music, and puppetry, the audience is guided through the Underworld, where they are led to examine the question: what would you sacrifice for those you love? 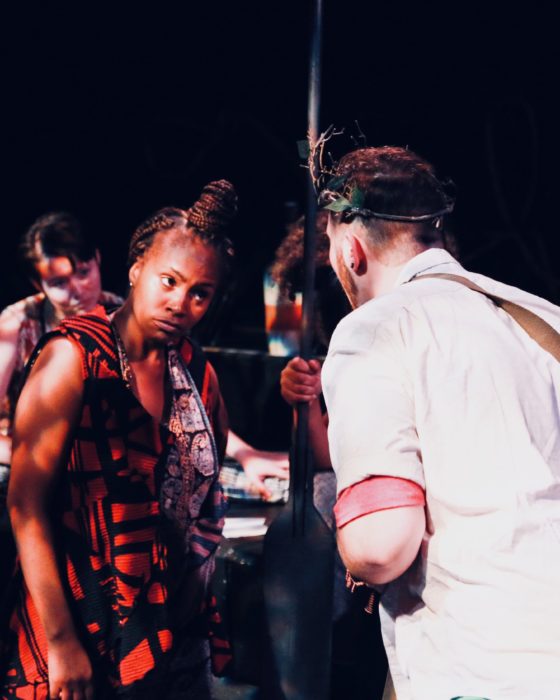 Q: What is immersive theater, and how does the audience experience different compared to “traditional” theater?

DR: Immersive theater can mean many different things! First and foremost, it means that the audience is invited to participate in the experience. This usually means that the environment itself, the typical theatre space with seating and a stage, is altered. For our production with Alight Theater Guild, each scene took place in a different location, so the audience moved around to various spots within the theatre. Attendees did not sit in arranged seats and watch the play unfold in front of them; rather, the play unfolded around them. In fact, at various points in the show, the audience was asked to wear masks, sing with the characters, and contribute poems. 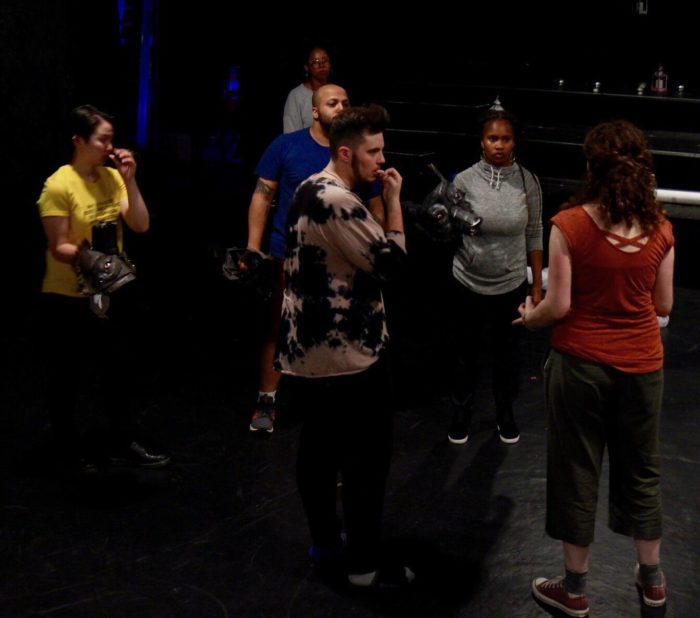 In our production, masks served two functions. First, we established a rule that all shades and souls in the Underworld must travel with a “veil”; the mask the audience members wore therefore made them a part of the world, rather than separate from it. Simultaneously, a mask creates distance. Since actors performed right next to the audience, a mask allowed people to feel hidden when the action was too close. 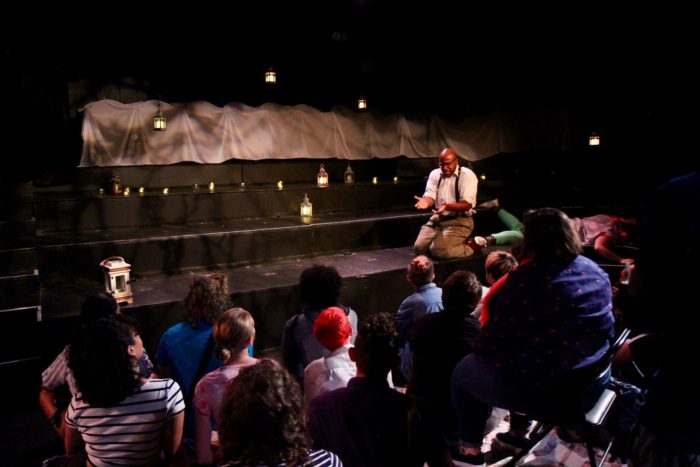 Q: The Greek myth you’ve adapted has strong themes of travel and immersion in another world. How have your personal travel experiences inspired your writing?

DR: Travel has inspired all of my work. When you travel, you meet different people with various backgrounds, stories, and cultures. You hear different songs and languages. All of this went into the creative process for The Elm Tree. Throughout the play, the character of Thrace (the Orpheus character) must navigate a completely foreign world. As a traveler, I have been lost, haven’t known a language, or simply been disoriented. Likewise, as Thrace’s journeys through the Underworld, he has to be a resourceful navigator, but also is fortunate enough to meet helpful characters. 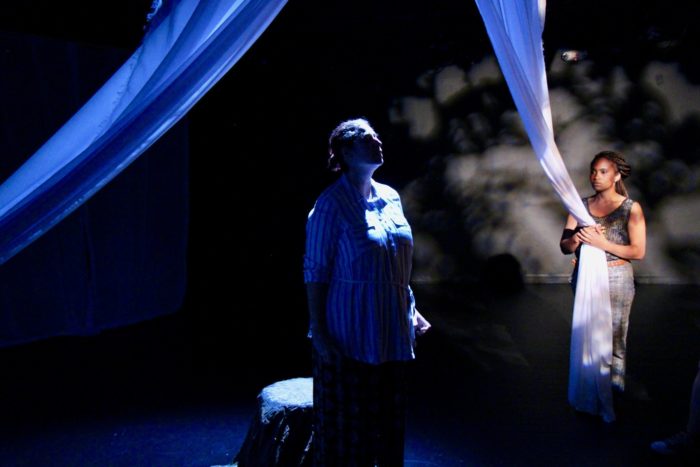 Q: I understand that this play has been 4 years in the making! Tell us about the process… what were the most challenging moments, and the most rewarding?

DR: It did indeed begin four years ago, and it’s been an incredibly challenging and rewarding process every step of the way. First was the writing, where I collaborated with two dramaturgs – theatre researchers and advisors who support and guide the playwright and director throughout the process. We had to create so much from scratch, asking ourselves: what are the “rules” or “systems” in our version of the Underworld? How many and what sort of obstacles should the protagonists face? How can we make sure that the struggles of the characters are nuanced, and not simply black and white? Next was the workshop process, where we brought in actors to help us hear the piece out loud.

It’s a challenging piece both in content and format, so there was always a worry that it wouldn’t “work” – perhaps the story might not be impactful, or the audience would feel lost. From the very first performance, it was clear that our hard work paid off. Seeing the show impact so many people – from the creative team members and actors to audience members I’d never met – was incredibly powerful. Knowing that it could have lasting impact makes it all worthwhile. 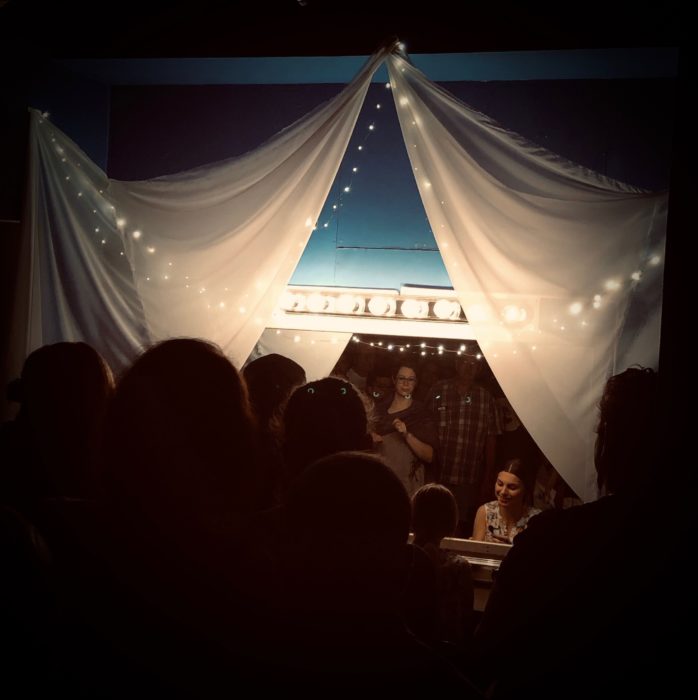 Q: As writer, director & producer, that’s a lot of hats to wear! Is one of these roles your favorite?

DR: It completely depends on the project! As a producer, you are in the position to support a lot of creative individuals, which is both interesting and not dissimilar from an AE staff member who manages the behind-the-scenes logistics during a trip! Playwriting is a beautiful process, as well, though sometimes it can be a solitary one. Creatively, I enjoy directing the most. In that role, I use text analysis skills, dramaturgy, my teaching background. Most of all, I’m able to collaborate with other artists all to bring about something completely unique and new. 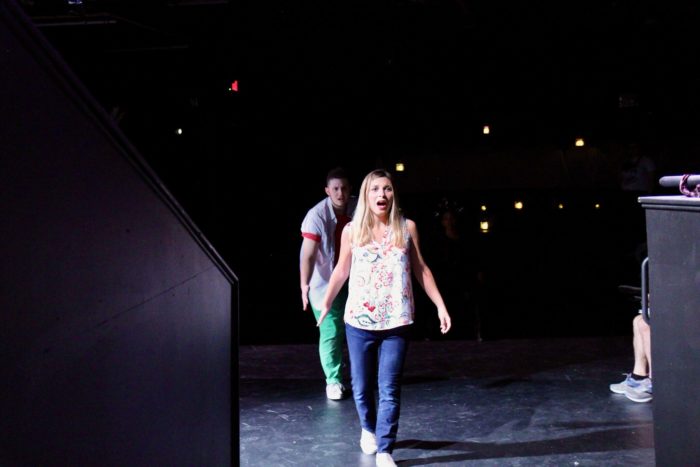 Q: Follow-up question: tell us more about your cast & crew

DR: There’s far too much to tell! I was so fortunate to collaborate with phenomenal people, many of whom have been with the play from the start. From the actors who put their hearts and soul into the work, to designers who created MAGIC in such a short amount of time, it’s both a humbling and inspiring process. Most of all my producer, Jonathan Zautner: a talented puppet-maker, mask-maker, choreographer, director, and a dear friend.

Two of the performers and the Assistant Stage Manager were former students of mine; it was very special to grow our relationship from an educational one to a professional one. 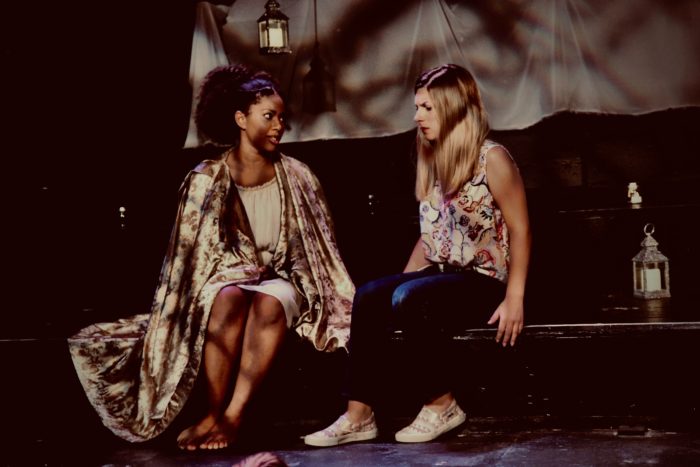 Q: Congratulations on a highly successful premiere in Boston. Are future productions planned for The Elm Tree?

DR: Thank you! Yes, absolutely. We learned so much doing this production, which gives us a better idea of how to travel with it perhaps to fringe festivals, or to New York. Stay tuned for more!

Leadership & Resilience in the face of Change