This October marks 3 years since a major milestone for AE staffer Tracy Roderick as she completed her dream goal of running the Marine Corps Marathon. We chatted with her after her experience in 2016 and are reposting the interview on the day of the 44th MCM:

Q: Tracy, tell me about your background as a runner; had you done any races prior to signing up for the Marine Corps Marathon? What was the longest distance you had run?

TR: I ran two half marathons, and my boyfriend Brett and I liked to run a five miler together every year. I used to live a pretty unhealthy lifestyle, but in my mid-30s I started running, joined boot camp for women, and signed up for my first 5K. That first 5K race was tough. I thought I would die, huffing and puffing the whole way, but I became addicted to it. I loved races—the excitement of it, pushing myself… I wasn’t running to win but to cross the finish line. I loved the feeling of accomplishment after completing a race and proving to myself that even though I was getting older I could still do it.

Q: Why this race?

TR: The Marine Corps Marathon has always been on my bucket list. I was usually guiding in DC on marathon day. My group and I would see the runners and stop and cheer them on for 5 or 10 minutes, and I would say, “That will be me one day.”

This year, a friend of mine who knew that I had been wanting to run a marathon asked me to enter the race with her and raise money to help build a community playground. The Marine Corps Marathon is also called “The People’s Marathon” because it’s the largest marathon in the world that does not offer prize money. It promotes physical fitness and attracts community fundraisers and people from everywhere. There’s tons of fundraising associated with this marathon.

We ran in support of RunningBrooke, a local nonprofit that believes kids do better when physically active, and since some neighborhoods don’t have a place for kids to play, they build and renovate playgrounds and parks in “playground deserts” throughout the city. Brooke, the woman who started the organization, used to be a heavy smoker. After 9/11 she was inspired to run her first marathon, and she just accomplished her 101st marathon! Brooke has run on every continent, and the Marine Corps Marathon was her 100th race. All fundraising goes to communities. RunningBrooke has a very small overhead, it’s just her and two other people. So my friend and I raised money while training to run. 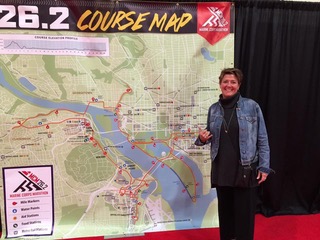 Q: How much money did you raise?

TR: I raised $1000. Balancing work while training for the marathon was difficult. Next time I think I’d use more mass media because while working and training at the same time was a challenge, asking for money was even more difficult than running the marathon!

Q: It takes a lot of discipline to keep training when you have a busy schedule. What motivated you to stick with it?

TR: Pressure. I kept thinking, “what if I don’t end up running,” and that was motivation to keep going. Then in the middle of peak training, I got an injury and couldn’t run for 30 days. From mid-July to mid-August, I had to take time off from running to recover from IT Band Syndrome. During that time, I cross-trained to keep fit. It was nerve-wracking to have to have an injury so close to the race. But I was bound and determined to do it, even if I had to walk the whole thing. Plus, I had told everybody I was doing it so I had to see it through! I couldn’t not do it!!

Q: How often do you typically run?

TR: I run anywhere from 4 days a week or more. It’s the only time when my brain shuts down, not having to think about anything, just listening to the pounding of your feet, everything else goes away. Then I come back and do day-to-day stuff.

Q: What was it like to run the Marine Corps Marathon?

TR: Running is relaxation…running a marathon is not! Brett would meet me every 5 or 10 miles and cheer me on. Mile 10, I was thinking, “Okay…” Mile 15, I was looking at the Washington Monument, which was great but I was starting to feel it. Mile 18, I was crossing the 14th Street Bridge and thought, “Oh no.” As we were crossing the bridge, we saw the Coast Guard booth down in the water. We could tell the guard was getting ready to say something, he was waving to us and shouted, “You all better not stop! Keep going! You’ve got a ways to go!!”

Mile 24 was cool, coming around the Pentagon and starting to see Arlington National Cemetery. It was pretty moving because when you’re running with everyone next to you, amputees, people in wheelchairs and the people pushing them…you look at them and think “a little bit of pain’s not going to hurt.” At the end of the marathon, it was just very moving and getting emotional. You train all these months and you’re near the end and it’s almost over and you’re like “Wow.” It’s hard to explain, it’s emotional. 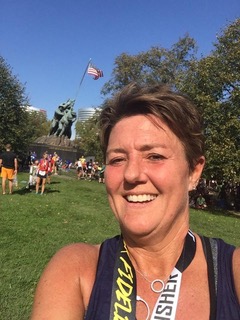 Q: What motivates you to carry on during a race when you feel tired?

TR: Looking at everyone else who should be having issues and realizing that if they’re out here, you can be out here. Some runners literally had prosthetic limbs. It was just phenomenal. You know their legs had to be hurting because it’s not even a natural surface. Some runners were missing arms, there were guys and girls with missing legs. Running with them was such an inspiration.

Q: Was there anything about the marathon that surprised you?

TR: I was just so thrilled I didn’t lose any toenails!! After my first half marathon, the next day I was drinking coffee on my porch and looking down at my toes I saw a toenail sticking straight up!

Q: What was it like crossing the finish line?

TR: My family and Brett’s sister and brother-in-law were at the finish line. Right when I was coming up the hill at Iwo Jima, I was so exhausted but I didn’t want to walk across the finish line. I wanted to keep running. My family started screaming my name and I looked over and thought, “Okay, I’ve got to finish now.” My brother-in-law said it looked like I kicked it into high gear and literally ran past people with a burst of speed that he was totally shocked with. I just wanted to run because it was so awesome. Marines were lining both sides of the finish line and giving everyone high-fives. I high-fived every one and said “thank you for your service.” I crossed the finish line and they put a big medal around my neck, and I was just trying to hold the tears back. It was probably one of the most special moments of my life. It was that cool. And it didn’t hurt that marines were all so cute. My race time was 5:39:04.

Afterwards my family and I went out to lunch because I hadn’t really eaten anything, just animal crackers and stuff during the race. I got the biggest burger! I was so hungry it was ridiculous! 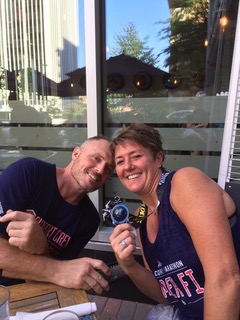 Q: What top tip would you give to someone about to run their first marathon?

TR: Definitely do it! Start training early, and take it easy because it takes time. You need to commit to running 4 or 5 times a week, but it’s worth it. For anyone running their first marathon, the Marine Corps Marathon is just awesome. Anyone should run it.

Tracy Roderick is still happily running today and will be training to run MCM again in 2020!

Leadership & Resilience in the face of Change